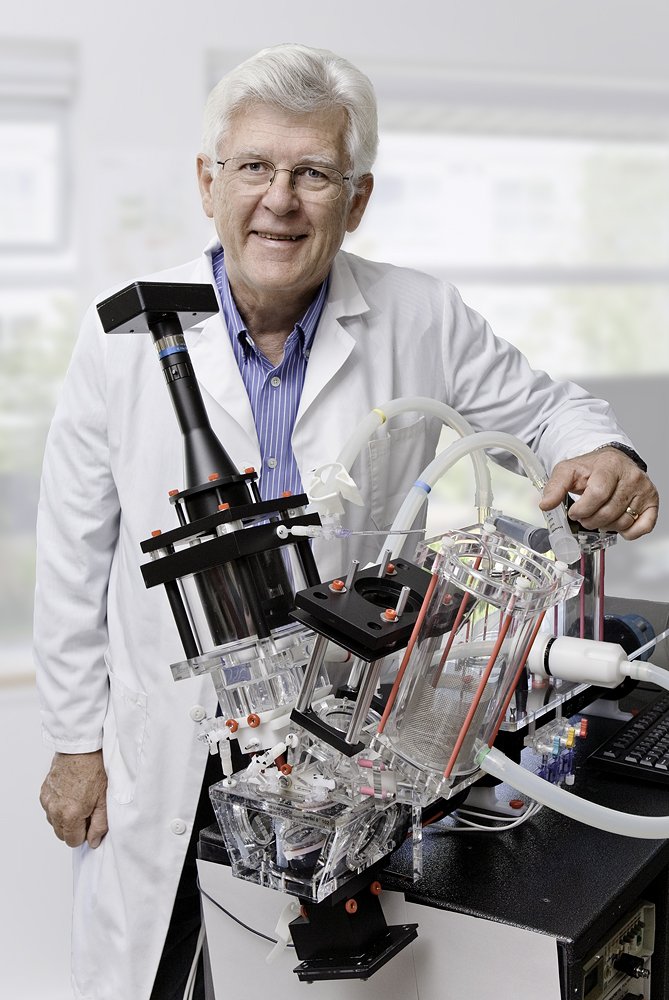 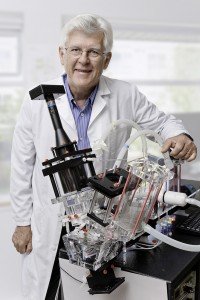 VL:  We recently completed market research with our customers and were amazed at the longevity of ViVitro products.  Universities describe finding an unused SuperPump pulsatile pump or Pulse Duplicator and quickly bringing them back to life for new research after a 10 year rest.  Does that surprise you?

LS:  Not at all.  We found that cardiovascular device testing was an important and ongoing research niche and increasingly discovered that special test equipment and services were needed year after year.  The nice thing was that our small business was filling this niche year after year. We found the pace manageable and we didn’t have to completely redesign our products every few years.  It is also gratifying to see that VL continues to meet the needs for this niche market.

VL:  What were some of your personal highlights while creating ViVitro?

LS:  There were a number of high points at VSI– all involved research.  Nothing makes you feel younger than discovering something new.  For example, we designed a bi-leaflet tissue valve based on a bubble shape.  Although they eventually decided not to continue development, St. Jude Medical bought the rights which in turn led to the creation of ViVitro Systems Inc. in 1984 by the two co-founders.

The publication of our test work with our equipment stimulated interest in what we were doing.  People then asked, “Do you sell those instruments?” And I thought, “Yeah, I made them functional, durable and reliable, they should be for sale.”  Subsequent high points were the second, third, and fourth sales.  We’d write the name of the purchaser for each sale on our blackboard.  Before long, we needed another board.

VL:  What have you been working on since selling the product lines of ViVitro?

LS: I left the product business because it demanded so much time that I was not able to spend time on my passion for research.  I had been involved with research which used high speed photography.  I was motivated to consider a new approach by my appreciation that the motion of heart valves is too fast to see but too important to ignore. Back in 2002-2003, high speed video motion analyzers from Kodak were very expensive and could capture full frame images at about 1000 frames per second.  A German company was interested in our testing their valve prototypes using that camera.  I realised it would take a lot of dollars and analysis time to get data from the hundreds of pictures each experiment would generate so this set me thinking about an alternative.

Within two weeks I built a simple unconventional system for capturing and measuring valve motion.  This involved a device that directed a light source through the heart valve to a photo sensor on the other side.  It resulted in a simple way break down the barriers of time and space and measure valve motion using inexpensive components. Then, it was necessary to put the project on simmer until we sold the company in 2009.

VL:  How has the research progressed since the sale?

LS:  The technology I’m working on I’ve named LeonardoVSI after Da Vinci because he was the first person to describe natural valve dynamics.  I can’t imagine what he’d think if he were able to view the results now being obtained with LeonardoVSI. Only fleeting glimpses of prosthetic valve motion can be seen by your eyes requiring high-speed imaging techniques to see quantitative details. LeonardoVSI provides a simple way to do this.  Combining instantaneous volumetric flow rate and valve motion data, previously unseen crucial moments near flow reversal and valve closure revealed remarkably large regional backflow velocities across mechanical heart valves.  They were short lived and far exceeded levels found when tissue valves were tested.  I surmised that such intense flow velocity transients in the blood would likely generate shear damage of blood components that could be initiating the clotting cascade.

A further insight was that the higher these transients were, the more the valve thrombogenic potential.  Mechanical valves have a huge reverse flow velocity spike near the moment of closure—but it is much less with tissue valves.  To me, this was the first time I observed a major fluid dynamic disparity between mechanical and tissue valves.  Could this be the primary reason for mechanical valves thrombogenicity in contrast to tissue valves? I still endeavour to publish my VSI conducted research work1, 2.  Part of my motivation to continue my research is that efforts devoted to valve design and manufacture have been intensely focused on valve open phase performance to the exclusion of innovative thinking about dynamic flow conditions during the closing phase.

In the past few years, transcatheter aortic valve implantation (TAVI) procedures have become more widely accepted as an alternative to surgical aortic valve replacement.  A frequently reported complication is significant paravalvular leakage. In contrast to mechanical valves and surgically implanted tissue valves that incorporate external sewing rings to achieve a haemostatic seal, TAVI devices rely on an expanding mesh frame for coaption to the patient annulus.  Because of calcification and other factors the coaption is frequently imperfect leaving the patient with a significant back leak around the device.  Manufacturers of these devices are now seeking modifications to reduce these residual leaks on the expectation that substituting a small leak for a large one will benefit the patient. I think it may make it worse2.

At the moment of closure you have a backflow through an opening that becomes smaller as it reaches a minimum baseline.  With TAVI it has to go through paravalvular leakage areas.  The valve regional flow velocity (cm/s) is derived by dividing the instantaneous LeonardoVSI data (cm2) into the flow meter flow rate data (ml/s). The smallest area for any valve is when it’s closed.  Perfect sealing provides zero leakage area.  Short of this ideal, very small closed leakage areas are worse than larger ones because flow velocity goes up as area goes down.  For example, we have found that backflow transients can reach as high as 200-300 metres per second with a mock TAVI paravalvular leakage avatar2.  Prior to LeonardoVSI, no instrumentation could resolve transient velocities in immediate proximity to valves of such magnitude.  I want to validate our findings with clinical results and as well as with Computational Fluid Dynamics (CFD) and perhaps explore some acoustic methods.

VL:  What are your goals with this research?

LS:  I want to communicate my findings in the open literature.  Ultimately, there is need for a better heart valve.  I don’t see that happening yet.  Inertia and the status quo have very powerful negative influence.

If all my efforts are successful, I hope they contribute to the next generation heart valve.  I think LeonardoVSI technology improves the prospects for success.  The market has been obsessed with improving forward flow performance of valves to achieve a less or non thrombogenic valve.  In my opinion, that obsession is misplaced. -the key is to reduce transient flow velocity near valve closure!

Simulating the Dynamics of an Aortic Valve Prosthesis in a Pulse Duplicator: Numerical Methods and Initial Experience

A Database Obtained From In Vitro Function Testing of Mechanical Heart Valves: